The Georgiadi Club Rugby Sevens 2019 (Men’s and women’s) are happening from the 3rd – 4th August 2019 and is hosted by the Calcutta Cricket & Football Club (CC&FC).

Who is playing at the Georgiadi Club Rugby Sevens? 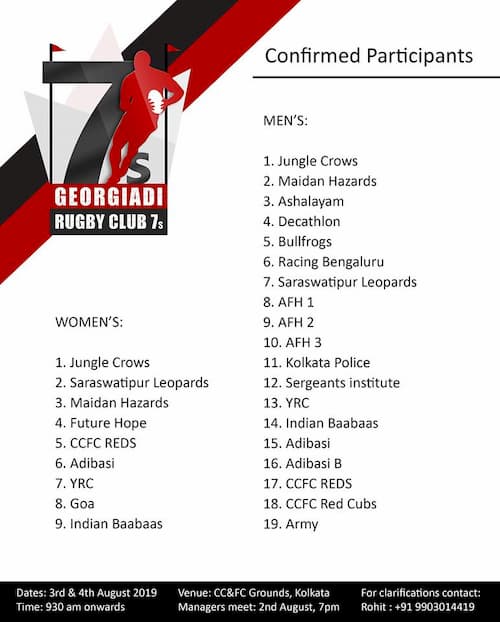 Who are the CC&FC?

The Calcutta Cricket Club has been around since 1792 and is recognised as the oldest cricket club, outside Great Britain. As a Rugby Club, the Calcutta Football Club was founded in 1872, and is, therefore, the oldest rugby club in the world outside the United Kingdom.

The term Football was used synonymously with rugby at the time, hence why so many rugby clubs still have it in their names today.

Famously,  in 1877, the club Committee “decided to donate a trophy made of ornate Indian workmanship to the Rugby Football Union.” This is still the acclaimed prize England and Scotland’s national rugby teams compete for every year, the “Calcutta Cup”.