Global Rapid Rugby gained a lot of attention and growing excitement in 2018, and the positive impact on Asian rugby development looks inevitable. Although the plans to launch the new innovative rugby series have been delayed until 2020, rugby fans in Asia should still be treated to the 2019 Showcase series.

Global Rapid Rugby (GRR) first full season in 2020 will feature ten rounds of rugby, with a total of 31 rugby union games (home and away format) and the final winners will earn a total pool prize of $AU1 million. There are six teams who will play in the GRR 2020 representing Asia, Australia and the Pacific. Bonus points are up for grabs if the team does one or more of the following;

Global Rapid Rugby has said, “ In 2019, the Showcase Series will travel throughout Asia, the Pacific Islands and Australasia to give fans, viewers, players, and coaches a live taste of what is to come in Season One in 2020, when teams will compete for an AUD$1 million first prize.”

Rapid Rugby Head of Rugby Matt Hodgson will continue to work with marquee players around 2019 and 2020 and added: “ I am confident the 2019 series will be a great demonstration of what a full season of increased ball-in-play time, attacking, aggressive, high scoring rugby will look like.”

Winners of the Asia and the Pacific series will access an AUD50,000 prize purse to assist local community rugby programs.

Teams played at least two matches in their home market. Although GRR said that “construction work on Samoa’s main stadium means its ‘home’ games will be played in Queensland and Auckland.”

This is what we know about the proposed format and rule changes Global Rapid Rugby will introduce in 2020. 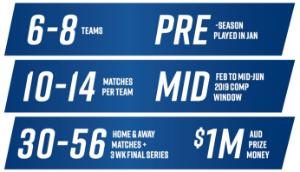 One of the more controversial aspects of the Global Rapid Rugby tournament is the proposed law changes. The new and revised laws are designed to increase ball-in-play time.

A Power Try is awarded when a team’s play is initiated from within their own 22m area and results in a try with no break in the continuity of possession by the scoring team. In addition, the plans are to have coloured lights on the goalposts to alert fans to when a Power Try is “live” (green lights), “dead” (solid red lights) or “scored” (flashing green lights). The result is that the Power Try offers a team the 9 points on conversion.

Rapid Rugby teams may make up to 10 player substitutions during the game.

Instead of the regular 80-minute allotment, Rapid Rugby games will be fast-paced, and a total of 70-minute total game time will be played.

Any kick that goes over the sideline on the full will be turned over to the opposition at the point of where the kick was taken from, even if kicking from their own 22m area.

The 2020 season will see 6 teams involved. The competition is due to have teams from Fiji, Australia, Hong Kong, Malaysia, Samoa, and 1 more Asian TBC.

The Force won the 2019 Showcase Series and will be favourited to win the 2020 GRR Championship. Home games are played in Perth in Western Australia.

The Fiji Rugby Union confirmed their participation with the team playing as the Fijian Latui. They played in the 2019 Pacific Showcase Series.

The HKRU confirmed their involvement and the name of the team in late 2018. The South China Tigers are due to consist of players from the “HKRU’s Elite Rugby Programme and Elite Sevens Athletes Programme.

Not much is known about the Malaysian representation but it is partnered by South African Currie Cup division one club Falcons.

The team’s home ground will be in the capital of Apia and the island nation will look to use the competition to develop local talent in the GRR 2020 Championship. Kagifa Samoa played in the 2019 Pacific Showcase Series.

It was announced in January 2020, that the Shanghai-based China Lions are a partnership between the Chinese Rugby Football Union, New Zealand Rugby Union and Bay of Plenty Rugby.

What teams could join GRR in the future?

The Singapore based franchise is called the Asia Pacific Dragons played in the GRR Showcase Series 2019 but was not unveiled for the 2020 season.

There are plans for more teams from China, India, UAE, Sri Lanka and Korea for 2021 and beyond.

As part of the expansion, Rapid Rugby is seeking to develop “rugby in schools and communities, establishing player and coach pathways and engaging the fan base.”

If this comes to fruition it bodes well for the growth of professional rugby in Asia and for the exposure of the sport throughout the region.

Read more about our views on Global Rapid Rugby