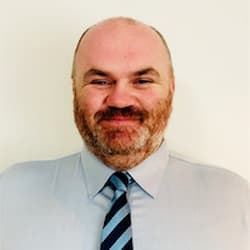 Rhys Jones has an impressive CV filled with rugby playing, coaching and development milestones. As a youngster in Wales, he represented his country at an age-grade level before making the move to Singapore in 2005.

Over the past 15 years, he has been involved with some of the most influential rugby clubs and rugby schools in the SEA country, as well as working with the Singapore Rugby Union (SRU).

We spoke with Rhys on all things rugby, with a particular focus on youth rugby and development in Singapore, and he does not hold back on his opinions or passion for the game.

You had a distinguished rugby career as a youngster, playing for the Welsh U16 and U18 national teams. Tell us a little about those experiences?

I think it’s common knowledge, that in Wales, you are born with a rugby ball in your hands! Growing up, my biggest dream was to represent my country and I was fortunate enough to get this chance. I had an amazing support structure growing up in Aberfan (Merthyr Tydfil).

Both my parents were PE (Physical Education) teachers, with my father playing football for Leicester City in his youth. In school, I was given an all-rounded holistic education at Ysgol Gyfun Rhydfelen, under the guidance of Mr. Gwydion Lewis and Mr. Simon Davies. But it was at a club rugby level, under the coaching of Wayne Jones (Ebbw Vale Rugby Football Club) that I learnt the most. Mainly on how to be strong, yet honest, on and off the field.

Playing my first match for Wales U16 v Portugal U18 was both memorable and emotional, yet the best memory was with Wales U18, we were 21-0 down at halftime versus England U18, only to come away with a  22-21 victory at Chester! Did you think you had a chance at the Welsh Senior Men’s setup – was that your goal or what changed?

Although I was part of the WRU (Welsh Rugby Union) Dragons Trust scholarship program aged 16-21, the regional setup was being rolled out within Welsh Rugby and in a way, I missed the boat.

Schools rugby was key to getting national recognition and Welsh club rugby was not a priority at that time. It was changing times within Welsh Rugby. I wanted to further my academic education so I undertook a Sports Coaching BSc (Hons) course at the University of Wales, Institute Cardiff (now Cardiff Met).

Following the completion of my degree at 21 years old, I took up the opportunity to work in Singapore for 12 months with the Singapore Rugby Union (SRU), working as a Regional Development Officer. Moving abroad to work at 21, kind of ended any hope of progression within the Welsh Rugby scene.

You made the move to Singapore in 2005, playing for both Bedok RFC and Wanderers RFC. How did the move come about and can you tell us about the two Singapore clubs you played for, and why them? 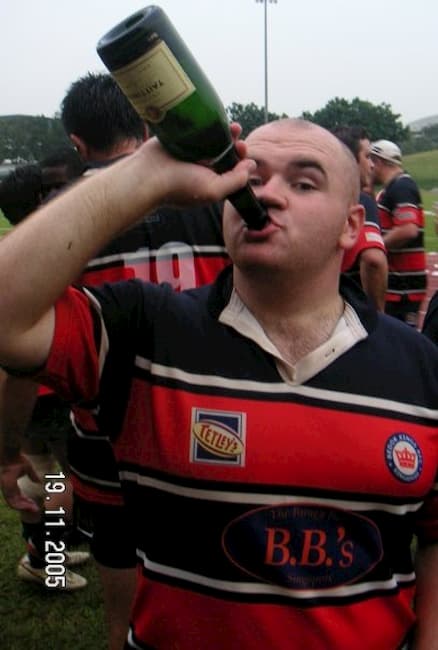 That’s right, in 2005 I joined Bedok Kings. Mainly, as most of the Singapore Rugby Union staff played there. It is a very local rugby club. I won my first Singapore Rugby Championship at King’s.

I had an amazing chat with the Wanderers RFC President, Paddy Knight in 2006, and joined them as player-coach the following season.

It was tough making the transition from player to player-coach, mainly as I was still drinking every week with most of the boys! Wanderers RFC was an amazing experience for me. I worked with some quality people in Calven Bland and Paddy Knight, and socially, its the best club in Singapore, by a long distance.

I was lucky enough to go through a successful period in the club’s history with the Premiership XV but the most rewarding moment was initiating the Wanderers RFC Academy and establishing a solid local pathway for the future, for the club and for Singapore Rugby.

In 2005, you simultaneously were the Regional Development officer for the SRU. What was your impression initially of rugby in Singapore and what were the biggest developmental issues when you arrived?

When I joined Singapore Rugby in 2005, it was during a pretty volatile period for the organisation. One week, the Finance Manager ran away with millions of dollars from the rugby fund – the following week all the staff resigned.

All I can say is, I learnt how not to react in a crisis! Although working for Ridzal Saat was enriching, I felt the middle management at Singapore Rugby lacked focus, developmental structures, and basically a desire to improve Singapore Rugby from the bottom up.

How would you describe the quality and pitfalls of rugby in Singapore?

If we compare rugby in Singapore from 2005 to 2020, it’s pretty dismal reading, to be honest. Although there has been much promise with the introduction of the Singapore 7s setup, both the 15s and 7s programs have been underperforming over the years.

Club rugby in Singapore, although socially engaging and an opportunity to make friends for life – does not seem to be producing the kind of national-level players needed to propel Singapore Rugby into the right direction. Players are comfortable playing club rugby for SCC/Wanderers/Bucks and this has an adverse effect on the national program, I feel.

If you compare Hong Kong with Singapore, it’s really night and day, to be honest. HK has taken great strides in:

Hong Kong is certainly the leading light within the Asia Rugby community and that’s all down to amazing guys like Robbie McRobbie (CEO at HKRU), Dai Rees (recently left the HKRU) and Leigh Jones (General Manager of Rugby Performance at HKRU) working hard at the helm.

Professionally and rugby-wise, you were the Rugby Master at Raffles from 2006-2011 and at Anglo Chinese School (ACS) since 2011. Can you explain what your role as a Rugby Master is and identify some of the proudest moments with both of these schools?

In 2006, having joined Raffles from Singapore Rugby, it was a pretty big ask to compete consistently with the other big two Singapore rugby playing schools (Anglo Chinese School and St. Andrew’s School).

Faizal Ahyar and I worked tirelessly to put Raffles back on the Singapore rugby map again, culminating in 4 ‘A’ Division (U20) titles in 6 years and winning the  ‘C’ Division (U14) in 2010 – Raffles last won this National title in 1996.

Both roles saw me nurturing around 120+ student-athletes using the 6 Pillars of Development to maximize performance: 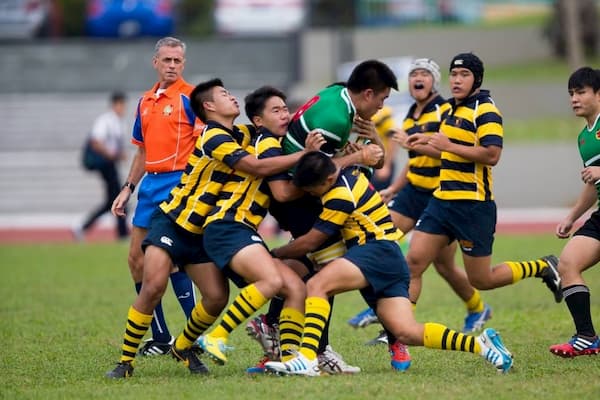 What do you enjoy about school-level and youth rugby? How well are the school’s rugby programs supported by the schools themselves and the SRU?

The most enjoyable part of the role is working with the children over a 6 year period (aged 13-19) and seeing them grow each week, and each month, into strong sportsmen but ultimately good sons/brothers and fathers of the future.

In Singapore, every boy has to serve in the National Service from 18-20 years old – this has a huge impact on the boy’s development. Combine that with the high academic pressure within Singapore and many of the student-athletes I worked with go on to become Doctors, Lawyers or Engineers – the longterm sporting landscape for sport, not just rugby, becomes very bleak.

Rugby is supported strongly by some schools – but many do not get the support they need and rely too heavily on paid coaches to achieve not only unattainable results, but demanding developmental gains, all in one go.

In Wales, my rugby development was enhanced by strong, honest and caring PE teachers who would go the extra mile to ensure we stayed on the right path. Singapore does not follow this model, with coaches being paid to train the team while PE teachers are not involved in this developmental process. 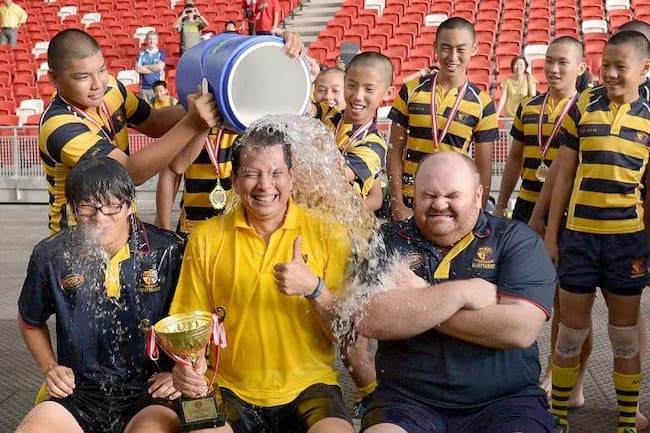 What are the main goals you have in the current programs? Do you see rugby as being a positive gateway for the kids you train to skills beyond rugby?

Although rugby is not as well followed as football or basketball in Singapore, it will always have a special place in the hearts of those who play or watch it. There’s an old saying, with a lot of truth in it: “Football is a gentleman’s game played by hooligans, and rugby is a hooligan’s game played by gentlemen”.

In working so closely with many student-athletes over the years, it’s about making them all-rounded, honest and direct in their approach, on and off the field.

What more could be done on a national level in your opinion to grow the game and increase the quality and competitiveness?

Individual sports excel in Singapore, such as swimming, table tennis or badminton, whereas team sports find it difficult to compete within their respective Asian tournaments. With the growth of rugby 7s, I’m sure Singapore will be throwing the kitchen sink at competing with the likes of Hong Kong, Korea and Malaysia on the sevens circuit but the results have not been great over the past 5 years, where other nations have improved leaps and bounds.

In terms of growing the game in Singapore – it’s about the big picture. Kids want to play matches. If you go to Australia, they’ll have a tournament for up to 12-24 teams at the end of each month. That’s minimally 12 tournaments every year. Kids are playing the game, enjoying, learning, winning, losing, bonding – everything with a smile on their face.

In Singapore, my son who is 11 years old, will be lucky to play 2 tournaments in 12 months. Kids get bored with training the whole year-round and there is very little cross-training or the ability to play multi-sports at schools (due to the academic demands).

The SRU national teams had a poor 2019. Although the school levels seem good, why does Singapore at the national level not perform?

Although the schools are producing many quality players through the roughly ten playing Secondary Schools in Singapore, there is a pathway lacking for these school players to club academies and then onto the National Programs of Singapore Rugby.

Combine this with compulsory National Service (aged 18-20), and many of the students moving into high-paid jobs (doctor/lawyer/engineer) following university, sport in Singapore takes a back seat, to be honest.

To summarise, Singapore Rugby needs to move towards semi-professionalism at the top end, while engaging school players to raise the level of club academies.

Take a leaf out of Hong Kong Rugby Union book and you wouldn’t go far wrong. Even Malaysia is turning heads with a solid direction from guys like Brad Mika, who not only understands the local culture but leads from the front in terms of coaching and development.

What are your views of Asian rugby – its cohesiveness, development plans and region-wide competitions?

Having been in Asia since 2005. I think many nations have taken great strides in both their high performance and developmental units to boost the game of rugby. Notably Hong Kong, Philippines and Malaysia. You can map both the improvements made and long-term strategies in place with these Unions.

Rugby has an integral growth opportunity in the coming 5 years, following the successful Rugby World Cup in Japan in 2019. Asia held its own on the global stage – and I think it surprised many in the West.

If any Asian country can make Rugby the National Sport – for Singapore this dream could come true for many. Lastly, COVID-19 has been disruptive at levels and undoubtedly tragic too. How have you tried to cope and plan around this? What are your positive takeaways from the crises?

I’ve always tried to take the positives out of every situation – even at the darkest times. I think both the family bonding experienced during this crisis, and with parents being at home at all times, has seen the family nucleus coming together for many.

I’ve been very impressed with how countries such as Taiwan arrange and deal with their waste. On reflection, this pandemic has made us all think about how we should live our lives, working together for a common goal and appreciate the hard work of many in the community, such as health workers.

We would like to thanks Rhys for his time in doing this interview with us. 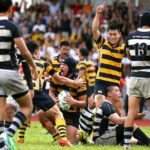