World Rugby has confirmed that the Rugby World Cup (RWC) Sevens tickets will go on sale on Monday, 28 February 2022 for the three-day event to be hosted in Cape Town from 9-11 September.

With the top 40 women’s and men’s sevens rugby teams on the planet set to battle for the title of men’s and women’s world champions, World Rugby said: “Cape Town will provide a picturesque and iconic backdrop to the tournament and organisers are planning for a packed stadium with more teams, more action and more at stake than ever seen before at a Cape Town event.”

World Rugby Chairman Sir Bill Beaumont added: “Cape Town has a strong track record of hosting world-class rugby sevens competitions and fans can look forward to a feast of entertainment over three action-packed days, while the teams will be looking forward to playing in front of a passionate and knowledgeable crowd.

We will continue to work closely with the SA Rugby Union and all other stakeholders to ensure the delivery of a safe and secure world-class event for players, teams and fans to enjoy.”

Jurie Roux, CEO of SA Rugby, said: “World Cups are unlike any other rugby tournament; for its duration the eyes of the rugby world will be on South Africa, as all roads lead to Cape Town.

“It’ll be bigger, bolder and brighter than anything we have put on before and will climax with the lifting of the Melrose Cup and the Women’s Rugby World Cup Sevens trophy on a do-or-die final day.” 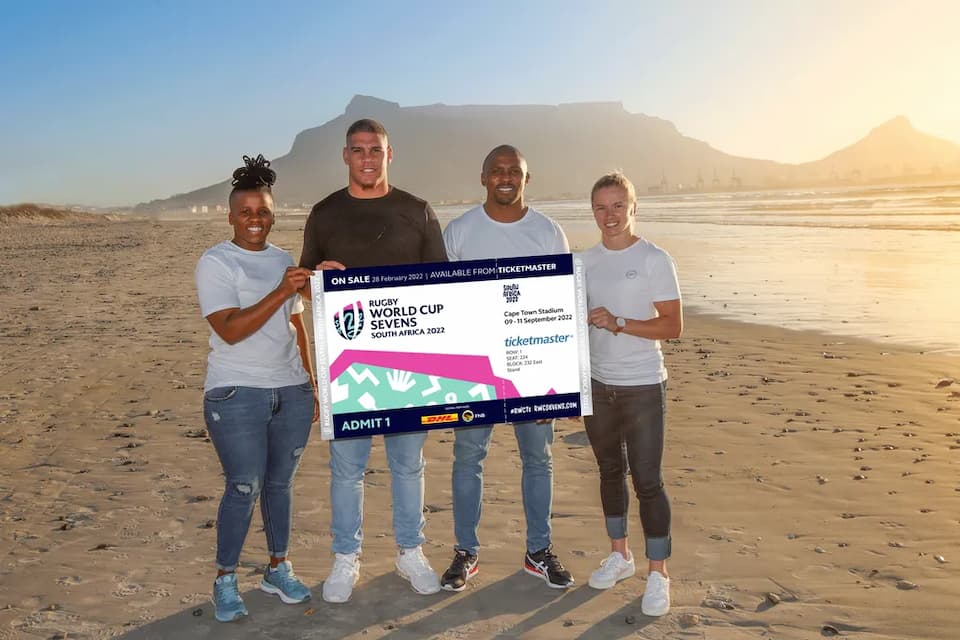 Photo Supplied: Sevens players (left to right) Lusanda Dumke, Zain Davids, Shakes Soyizwapi and Nadine Roos are pictured celebrating the announcement of ticket sales for Rugby World Cup Sevens 2022 in from of one of the seven natural wonders of the world, Table Mountain.

How much are the RWC Sevens 2022 Tickets?

Discounted family and scholar tickets and packages, as well as a ‘Party Stand’ packages, will also be available.

Roux added: “The global vaccine roll-out has allowed the return of capacity crowds around the world and we’re expecting that experience to return to South Africa by the time of Rugby World Cup Sevens.”

Details of event hospitality as well as tour and travel packages will be announced. Ticket sales will go live at 07:00 GMT (09:00 SAST) on Monday, 28 February at www.rwcsevens.com.

Who has qualified for Rugby World Cup Sevens 2022?

In total 21 teams have already secured their place in Cape Town. Regional competitions will determine the remaining 19 places but the teams from Asia have been confirmed.