Now that there have been a few days for the confetti and dust to settle on the Cathay Pacific/HSBC Hong Kong Sevens 2022 – just a quick scan of the overwhelming positivity of the tournament online and it’s clear to see that the organisation of the event, led by the HKRU, showed how important it was for Hong Kong to go ahead and host the first Sevens in three years. And the excitement on the field was not half-bad!

Much was made of the 1,308 days since the last final was played in Hong Kong back in 2019, and Australia rightly will be the talk of the tournament for their remarkable run of play-off matches that saw them claim their first Hong Kong Sevens of the professional era and their first HK title since 1988.

Australia captain Nick Malouf said “After having done so well last year, to come out here and back it up straightaway and win Hong Kong for the first time since 1988, incredible. I think we’re cutting a few years off our coach’s life leaving it so late!

“There’s not much between the teams. This is the Olympic qualifying year, so everyone’s going to be coming in red hot and it’s going to make for great viewing and tough games on the pitch.” It was a serious upset for the record books by defeating the Fijians who were chasing their own records but there were a number of great upsets and surprises over the weekend. France winning bronze can not be ignored (not the once again impressive Samoans who they beat), while the Blitzboks again disappointed and went down to GB in the pool games.

New Zealand for only the second time did not make the Cup quarterfinals and will be looking to do much better over the upcoming events in Dubai and Cape Town.

And a special mention to Hong Kong’s Craig Chan who made history by becoming the first Chinese referee to officiate at the Men’s World Series!

How did the Asian Sevens Teams Far at the HK Sevens 2022?

Japan and HK had played each other leading up to the Hong Kong Sevens at the first leg of the Asia Rugby Sevens Series in Thailand and HK were triumphant by beating Japan in the final – quite comfortably.

Whereas the home side fielded the same squad, Japan had made a number of changes and they were stronger at the  Cathay Pacific/HSBC Hong Kong Sevens 2022. In total the two Asian sides played ten matches, and the only win was that of Japan over Hong Kong in a tightly contested match on Sunday with the Japanese 24-17 victors – spoiling the party for the home fans. 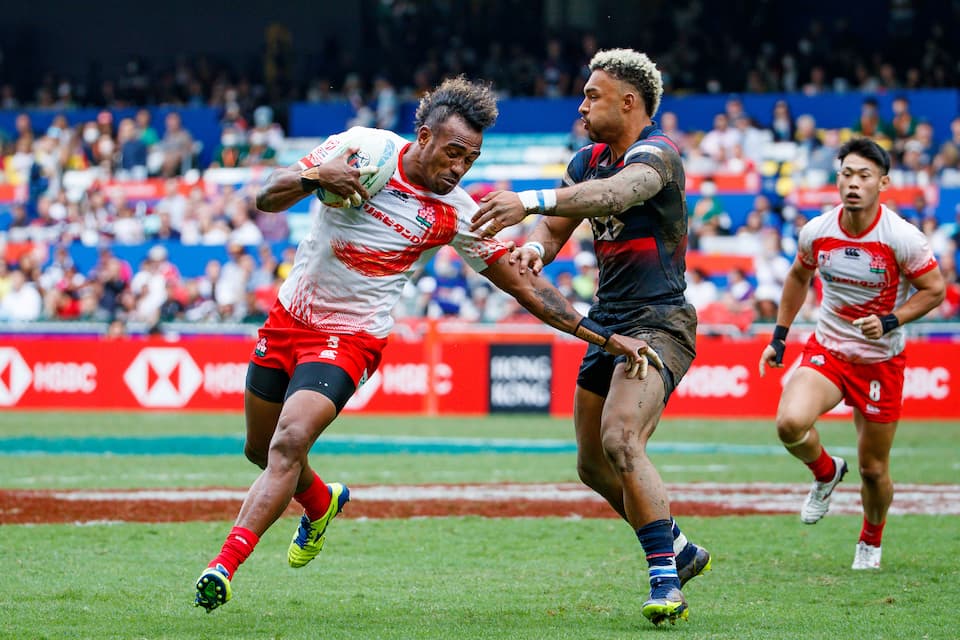 Photo by Ike Images – Japan came out on top in the Asian derby, beating Hong Kong 24-17

You can see a summary of all of the results here. These are just a few clippings of the many many overwhelming positive reports from the Sevens weeks in Hong Kong, from media, players, officials, sponsors, commentators, match officials, fans and so many more.

According to the SCMP, Hong Kong Rugby Union estimated that the cost of hosting the event was likely to be near HK$50 million (US$6.4 million). Previously the Sevens had generated HK$400m into the economy, but the lack of overseas spectators was expected to cut that by about HK$100m or more –  the time between now and the event in March is crucial for the easing fo further restrictions.

Robbie McRobbie, the Hong Kong Rugby Union’s CEO, told the SCMP that the sight of 20,000-plus fans all in one place had “genuinely brought a tear to the eye”, and that he felt a successful weekend would represent a milestone on the road back to normal.

“We all want to get back to normality. I think if we can help that, if we can be part of the solution, then that, for me, is what we’re all about. We’re not at the end of the journey, let’s be honest, but we’re getting there. After three years, this does feel like a kind of celebration that Hongkongers have come through this and the end is in sight. That, for me, has very much been the vibe today.” What Changes have been Announced for the World Sevens Series

This means that the teams will be in a tight fight to avoid relegation throughout the 2023 Series with every match and every point counting towards the final Series rankings.

This also means for teams from Asia such as HK, Korea etc trying to gain a spot in the World Series has become even more difficult.

The returns with the women and men from 31 March – 2 April 2023 for the Cathay Pacific/HSBC Hong Kong Sevens. There is also an excellent article from the SCMP on the future of the Sevens in Hong Kong. 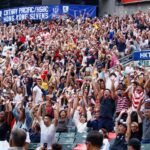