Round 4 of the JRLO 2022-2023 season is played over the weekend of 14-15 January 2023 and also the first round of games following the conclusion of the Japan University Rugby Championship.

It was also announced by the NTT Japan Rugby League One on January 10, 2023, that 36 players from 24 university teams throughout Japan had been offered ‘Early Entry’ contracts with League One clubs.

This included three players from Teikyo and four from Waseda who played in the final of the Japan University Rugby Championship in January 2023. These reflect the change in player contract and registration rules for the 2022-23 season that allows players in their final year of university to play in NTT Japan Rugby League One matches.

The weekend of JRLO actions will also see four highly respected coaches in action as Eddie Jones, Wayne Smith, Steve Hansen, and Robbie Deans are all involved in Japanese rugby.

Jones and Smith are advisors at Tokyo Suntoy Sungoliath and Kobelco Kobe Steelers respectively and will face off on opposite sides on Saturday in Kobe. Their two teams are in tied for fourth place on the ladder, after suffering first-round losses.

On Sunday 15th January 2023, Deans takes on his one-time Super Rugby assistant Hansen, as Toyota Verblitz looks for a better fortune after two losses from the first three matches of the JRLO season.

Both coaches made an impact at the Crusaders, before international rugby coaching stints with Hansen winning the Rugby World Cup-winning coach in 2015, but Deans has won five titles with the Saitama Panasonic Wild Knights.

The second division returns after an extra week off and there are still two unbeaten teams, who are set to play each other at the Komazawa Olympic General Park Sports Ground in Tokyo – Israel Folau’s Urayasu D-Rocks will host the Toyota Industries Corporation Shuttles Aichi.

For brief highlights from all matches in JRLO round three, please visit here

The Mitsubishi Heavy Industries Sagamihira Dynaboars will be hoping to make amends for last weekend’s loss and they travel to Chichibu to face Toshiba Brave Lupus Tokyo. Although it was their first loss, they dropped from first to sixth at this early stage of the season and are now tied with three other sides on points.

The Brave Lupus notched up their second win of the season last week, and last year’s semi-finalists have benefitted from the in-form Brave Blossoms former captain Michael Leitch, as well as second-row Warner Dearns who made his international debut with Japan last year.

Brave Lupus are about to enter a challenging five-match stretch that includes Verblitz, Sungoliath, the Eagles and the Spears. 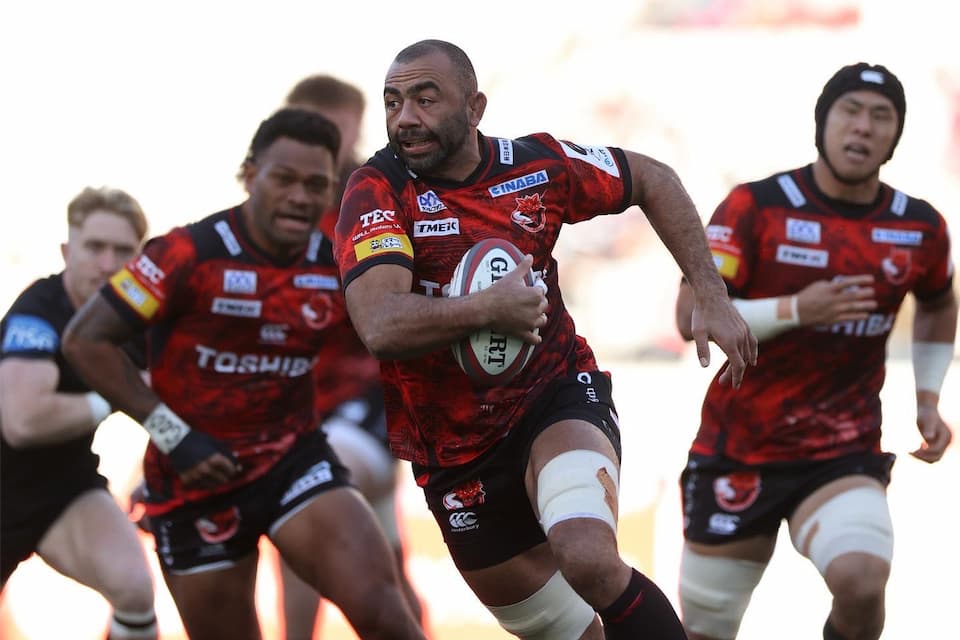 The Kintetsu Liners and Yokohama Canon Eagles are also both looking to avenge disappointing weekends and the  Eagles played for 60 minutes against 14-men but still couldn’t get the win.

The Liners suffered a 63-point thrashing and need confidence before they take on Sungoliath and Brave Lupus up next, so it will be important the home side gets back on track.

Green Rockets boss, Michael Cheika, will want more from his side, and Ludeke has chosen to rest Springbok hooker Malcolm Marx, who scored three tries in the first half last week, and three during Kubota’s 59-26 win over the Green Rockets last term. Marx is replaced by another South African, with former Bulls rake Schalk Erasmus making his debut while All Black Ryan Crotty starts for the first time in the campaign. Wallaby Bernard Foley drops to the bench.

Kazuhiro Taniguchi however starts for the Kubota Spears and he scored five tries against the Green Rockets during the match last season, in a match that saw 16 tries when the Spears won 71-41.

The 2018 champions, Kobelco Kobe Steelers have back-to-back wins over Kintetsu and NEC after a narrow loss to Canon on the opening weekend this season but last year’s finalists Sungoliath, who are in the same position on the points table with two wins and a bonus point from the first three outings,  are a tough challenge.

All Black flyhalf Aaron Cruden won’t feature after being red-carded against Yokohama for dangerous play, which sees Seungsin Lee, start.

Injury also robs the match of what would have been a physical head-to-head match-up between All Black midfielder Ngane Laumape and his side-lined Wallaby counterpart Samu Kerevi, however the backrow clash between Japan star Tevita Tatafu, and Kobe’s Ataata Moeakiola will be one to watch.

The Shizuoka Blue Revs will be keen to get the season going at home in front of their Shizuoka supporters and only have two losing bonus points to show for their efforts this season.

The Ricoh Black Rams Tokyo pulled off arguably the upset of the season so far last week by beating Toyota in Aichi to register their maiden win. Ricoh coach Peter Hewat is hoping for an impact from former England international Nathan Hughes, who only played 25 minutes off the bench at Toyota, after having started each of the side’s previous matches. Toyota Verblitz have one win and two losses for the season to date and sits eighth on the ladder, and this weekend face the current champions in their own backyard.

The Wild Knights have not dropped a game since they made Saitama their permanent home three years ago, and in their squad have star loose forwards Pieter Steph du Toit (South Africa) and Kazuki Himeno (Japan).

Meanwhile, Lood de Jager got his Japan Rugby League One career underway last weekend for the Wild Knights but fellow Springbok Damien de Allende received a red card during the win over Sagamihira for a dangerous cleanout at a ruck and won’t be playing.

Verblitz lost two of their first four matches during last year’s COVID-interrupted season and were unable to make up the ground to make the playoffs. The Wild Knights have won the past three fixtures against Verblitz.

The D-Rocks host the Shuttles as Division Two returns this weekend and after both clubs have invested heavily, Saturday promises to provide an early indicator as to who might hold the balance of power in the 10-round race to the playoffs.

The D-Rocks are favourites to win the division and have former internationals Greig Laidlaw (Scotland) and Liam Gill (Australia) on the bench. Folau has scored four tries in the D-Rocks’ opening two matches which is joint top in
the division, alongside the Hino Red Dolphins’ Chance Peni.

The Mazda Skyactives Hiroshima were denied a victory last weekend by a late comeback from the Kurita Water Gush Akishima, and head to Division 3’s only unbeaten side, NTT Docomo Red Hurricanes on Saturday.

Meanwhile, the Chugoku Electric Power Red Regulions, conceded 32 points without a reply during last weekend’s visit to the Kyushudenryoku Kyuden Voltex and host the Water Gush to Balcom BMW Stadium.