The draw for the pools has been made for the HSBC Los Angeles 7s rugby 2020 which will be played from 29 February – 1 March 2020. The US venue replaces the previous host city of Las Vegas.

This is fifth round on the men’s HSBC World Rugby Sevens Series 2020 and the Asian rounds are in Hong Kong and Singapore in April 2020.

The two-day rugby event will be played at the home stadium of the LA Galaxy (MLS) and the LA Chargers (NFL), Dignity Health Sports Park in California. This is the same venue set to host rugby sevens in the LA 2028 Olympic Games.

The USA sevens rugby team will be looking for a three-peat on home soil, after having won the past two years in Vegas, However, log leaders New Zealand are the form team and the South African Blitzbokke and Fijians (winners of the most recent round in Sydney) will be fiercely competitive.

The LA 7s will also see a return to the more regular qualifying format, that crowds and players are used to, with quarter-finals being contested after the group stages. The top two teams from each of the four pools will go into the quarters.

Korea is the invitational team and only Asian representation in Los Angeles. Japan 7s have been the invitational side to the previous events this year and both Asian nations are using the opportunity to prepare for the Olympic 7s in Tokyo later this year.

Korea finds themselves in a tough pool A with Fiji, Argentina and France. 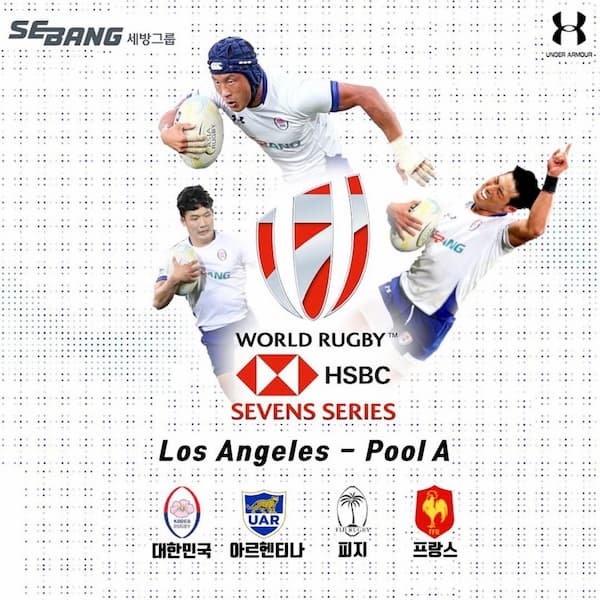 You can see the full men’s standings here.