The inaugural Asian Touch Cup 2020 will be hosted in Shanghai, China in October next year, the Federation of International Touch has confirmed.

The first Asian Touch World Cup was played in Malaysia earlier in 2019. In a press statement from the Federation of International Touch (FIT), they said the “Asian Cup will attract national men’s, women’s and mixed teams from across Asia, including newly minted FIT member Sri Lanka.”

In addition, General Secretary of the China Touch Association, Mr Topy Xu, said, “This a is a massive honour for China, and we are looking forward to welcoming the best Touch players from our continent to Shanghai. This event will build on the momentum established at the Touch World Cup in Malaysia earlier this year where the best teams from Asia met head-on with the sport’s leading lights Australia and New Zealand.”

The FIT Event Director, Mr Gary Reynolds, also weighed in on how regular high standard competitions are good for the growth of the game. “Europe has shown that through more regular competition, performances have improved with the likes of England on the verge of semi-finals in Men’s and Women’s Open and Scotland taking home bronze in the Mixed Open at the World Cup.

The Shanghai venue is perfect for this inaugural event. As the long-time home of the Shanghai International Touch Tournament, which regularly attracts club teams from across Asia, many of the Asian Cup participants will already be familiar with the facilities.”

The venue for the first Asian Touch Cup is the same as which the Shanghai International Touch Tournament (SITT) will be played in November 2019. There are over 50 teams across 7s divisions in action and it will be the 16th edition of the touch tournament in Shanghai. It is organised by the Shanghai Touch Association.

The first Touch World Cup to be held in Asia, took place in Malaysia earlier this year. There was representation from Asia from the following countries: 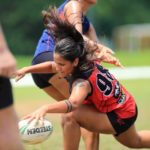